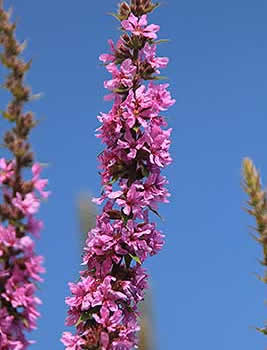 Purple loosestrife is an invasive species that has found its way to the Eagle River Chain of Lakes. Purple Loosestrife is a wetland and shoreline perennial plant with tall attractive purple flowers that crowd out native vegetation.

Invasives not only destroy the native vegetation, they also impact the entire ecosystem of the area including birds, reptiles, fur bearing mammals and insects who depend upon native wetland plants for survival.

In 2012, ERCLA partnered with Vilas County Land and Water to utilize the Galerucella beetle to control the spread of Purple Loosestrife as well as eradicate existing plants present on the Chain. The initial project had some success, and was repeated again in 2013, 2014 and 2016. Similar projects with this particular beetle have been used in Wisconsin for more than 10 years and all sites where the beetles were introduced showed some success. The beetle burrows into the roots of Purple Loosestrife in the fall, and when spring comes they emerge to feed on the leaves leaving the plant incapable of reproducing or further spreading.

ERCLA assists in the efforts to control this invasive by providing volunteers who survey and monitor the plants. Their data, including the GPS waypoint location, is given to the Vilas County Mapping Department who produces a map that shows all the locations of Purple Loosestrife on the Chain.

For more information about this particular invasive, visit the Unified Lower Eagle River Chain of Lakes Commission website or the Wisconsin Department of Natural Resources website.